Per a report on the Reds list-serv, Dusty Baker has said that Alex Gonzalez and Juan Castro have essentially locked up the shortstop position, and Jeff Keppinger will be “a utility player.”Ã‚Â  Granted, that’s second-hand, and a little vague, but in my opinion, there’s absolutely no reason to keep Juan Castro on this roster.Ã‚Â  Gonzalez certainly doesn’t need a defensive caddy, and Keppinger fields the position well enough to serve as a backup – and unlike Castro, he can hit.Ã‚Â  This is one to watch.

But even if he’s uselessÃ‚Â as a ballplayer, Castro is helping out.Ã‚Â  Here, he’s loaned (sold?) hisÃ‚Â glove to the Forty-Six Million Dollar Man, Francisco Cordero.Ã‚Â  (Hat tip to the great Uniwatch). 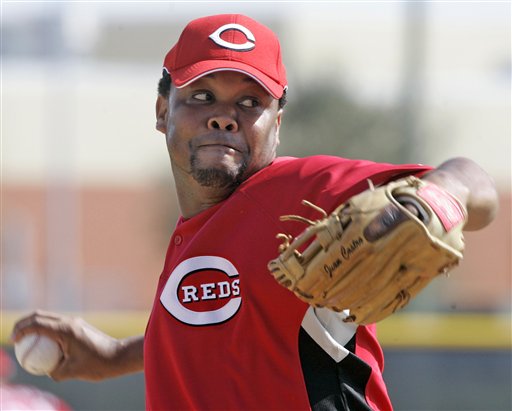